Yogita lives in a leprosy village in India. She is 12 years old. She was born in this village, and has lived there all her life because her mum had leprosy.

Her parents couldn’t afford to send her to school, so supporters of The Leprosy Mission have helped her to go to school since she was seven. 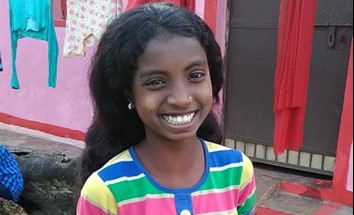 Last year, she noticed some white patches on her face. These patches started to spread over her body. Patches like these are often the first sign of leprosy. After a test, it was confirmed that Yogita had leprosy. Her hands began to lose the sense of touch. This was a very strange experience for Yogita, who had grown up being able to tell the difference between soft and hard, hot and cold, smooth and rough.

Now her hands are in danger of getting hurt, because she can’t tell if something is too hot, or too sharp.  Yogita had another problem too. She stopped going to school because people started to make fun of her, calling her names. She was very sad. Before catching leprosy she had loved school, and had hoped to become a doctor when she grew up.

At the Leprosy Mission hospital, she got some medicine to cure her of leprosy. It took her a whole year of tablets to stop the leprosy once and for all. A Leprosy Mission worker listened to her fears and worries about school and helped Yogita feel confident enough to return to school. Yogita has worked really hard, and managed to catch up and pass her year, despite missing much of it. She’ll now move from Standard 8 to Standard 9. She also took part in the end of year Talent Show, and teachers noted how well she did in it, and how much more confident she is becoming.

Yogita's story is featured in our Fair Share resources.