The difference a well makes

Yadu, Ajeeva and their three daughters were all diagnosed with leprosy and given treatment to cure them. But they were still often sick. 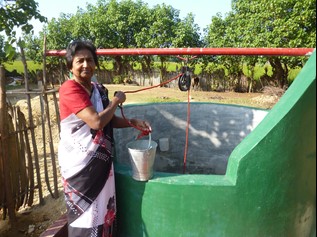 However, it wasn’t leprosy making them unwell; it was the water they collected each day from the river. Water that was teeming with bacteria. But they had no choice. There was nowhere else they could collect water. They had to use it for everything – for washing, cooking, drinking and watering their crops.

Until one day when people arrived to dig a well – a well that was funded by generous donors like you who had bought one of our Gifts for Life™ to give a family like this a healthier and happier future. The water is clean, fresh and readily available. They wake up each morning with so much gratitude for something that we can so easily take for granted.

A new well costs £800 and will completely transform people's lives and communities.