Veronica, a 30-year-old mum of three, was fortunate enough to have the CHEP (Community Health Education Programme) team visit her village. It was perfect timing and may well have saved her from a lifetime of disability.

Thanks to the team, Veronica learnt about the signs and symptoms of leprosy. So when she noticed unusual patches on her skin she sought help straight away. She was referred to Hombolo hospital where she received treatment. 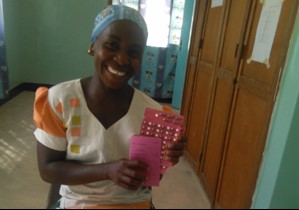 She was given a first course of drug treatment and told to come back for further supply in a few weeks. However, when Veronica returned to the hospital, she was told there were no more leprosy drugs available. Very disheartened, Veronica returned home.

Thankfully, a team from TLM, including Joanne Briggs, were visiting projects in Tanzania at this time. When Joanne spoke to Veronica and learnt of her plight she was able to speak to government health officials to find out why the supply of drugs was not reaching Veronica and other communities in this region. Soon, Veronica had the drugs she needed and she was so much happier.

Veronica’s life has really been turned around. Without your support this work would not be possible.

CHEP has provided her with training on human rights and now she works on a farm as part of a garden collective, growing tomatoes and vegetables. She earns an income and can provide for her family. She feels much more optimistic about the future.

Find out more about our work in Tanzania.