"I am an example for many people in my village"

Parbati contracted leprosy when she was 12 years old. She first knew something wasn’t right when she felt tingling sensations in her hands and legs and experienced episodes of high fever. 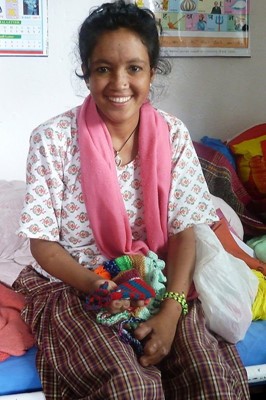 One of her household tasks in this remote region of western Nepal was to take the goats out to pasture and to collect firewood; both these activities led to her sustaining cuts and injuries to her feet. The leprosy bacteria damaged her nerve endings, causing her to lose sensation in her feet, so when she did cut herself on broken twigs, she did not feel it, making her vulnerable to ulcers and infection.

Over time her feet and hands became severly damaged; eventually she was unable to walk at all.

Parbati’s father and brother became frightened. Believing that the gods had cursed them, they isolated Parbati and made her live alone. She was no longer allowed to go to school and her family consulted traditional healers in a desperate attempt to find a cure.

But then one day, Parbati was listening to a weekly health programme on the local radio station which explained the symptoms of leprosy and that it could be treated. Finally, Parbati felt she had found the cause of all her suffering!

She heard about a local medical clinic being run by The Leprosy Mission and so she attended. Here, her leprosy was diagnosed and treated. The doctor encouraged her to travel to TLM’s Anandaban Hospital where she would get the full treatment she needed. There, she received reconstructive surgery on her thumb joint to enable her to move it and she also was fitted with special shoes to enable her to walk.

Parbati had a dream to learn how to knit. She wanted to open a small shop to sell her knitted clothes and toys. So, while at the hospital, TLM staff taught her to sew and knit as well as how to read and write. She was given some financial support from TLM to help set up her business and she currently earns just under 1,000 rupees a day (£10) which is absolutely amazing.

Find out more about our work in Nepal.