“I was studying at college when I cut my toe but it didn’t seem to be healing so my friends told me to seek medical advice.

I went to the government hospital, was examined, and told to 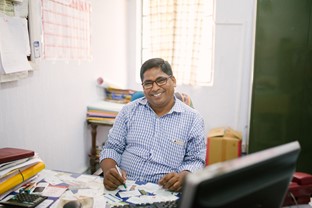 go to a TLM clinic. I didn’t understand. Why had they sent me there? Surely, I didn’t have leprosy.

At TLM’s Purulia Hospital I was diagnosed with leprosy and given six months MDT drug treatment. I was devastated. I thought my life was over. I told my father and he made me agree not to tell my mother or two brothers. We did not want to worry them or bring problems for the family.

However, despite taking the medication, after six months I developed foot-drop. Walking became difficult and people started to notice that I was different. I went back to TLM for help. My foot was put in plaster; at the same time another person also had the same problem and he was put in plaster too. At the end of the six weeks when the plaster was removed the other person was fine, but there was no improvement in my foot. I just kept asking, why? This was a very difficult time for me and I even contemplated suicide; what future did I have?

However, TLM staff encouraged me, as did my two best friends. They made me realise that I could finish my course and that having leprosy did not have to take away my future.

Sadly, the complications continued, forcing me to drop out of college. Eventually I was able to walk with a foot brace. I felt very low and was beginning to lose hope.

It was at this point that TLM staff asked whether I would be interested in doing a computer course at one of TLM’s vocational training centres. I gladly took up the opportunity and became a qualified computer operator.

During this time I also underwent successful surgery on my clawed toes at TLM’s Naini hospital by the renowned surgeon, Dr Premal Das, but miraculously something even more important happened; something that would shape my life.

I was released from treatment but my train home was not until the next day. I had nowhere to stay so I asked Dr Das if I could remain in the hospital. He agreed, but when he remembered that I was training as a computer operator he said that he would appreciate some help with some work in the office in return for a bed for the night. I happily agreed.

The next day I emailed Dr Das and thanked him for his generosity in letting me stay an extra night and said that if ever TLM needed a computer operator I would be happy to be considered; TLM had given me many opportunities and I would love to give something back by serving in the Mission.

Soon after my course finished Dr Das emailed me to tell me that there was a vacancy at TLM’s Kothara Hospital and encouraged me to apply. I was so pleased and even more excited when, after the interview, I was offered the job as a typist. After about two years I was promoted and in 2011 TLM supported me to study for my exams in Business Administration. I am now Business Manager at Purulia Hospital.

Now I have a chance to repay the kindness that TLM has shown me. I don’t just spend my time in the office. I try to make sure that I speak to every child and young person who has been diagnosed with leprosy, tell them the importance of taking their medication and help them to understand that leprosy does not have to be the loss of their future. I encourage them to see it as a challenge to overcome, giving them strength and hope by sharing my story. I not only have a good job but am also married with a four-year-old daughter. I am really blessed.”