Munia was found begging at a train station when a kind stranger noticed her disabilities and took her to Purulia hospital where her leprosy was treated. On arrival at Purulia, Munia was in a terrible way. 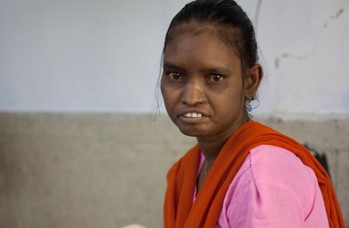 When her family suspected she had leprosy, they set fire to her and chased her from her home with knives leaving her traumatised and believing she was unlovable. At Purulia hospital her left foot was so badly infected that amputating it was the only way of saving her life and she was treated for severe ulcers on all limbs.

Thanks to you and the kindness and love she has received from staff at Purulia hospital, Munia has blossomed. She helps the other patients, including Arup, on the ward and has taught herself crafts, including embroidery and making rag rugs. Amazingly she can now even stand up on shoes especially made for her at Purulia hospital. She even took her first steps during a recent concert in the hospital chapel!

Find out more about our work at Purulia Hospital, including our campaign to transform the outpatients' depatment.