"I was an outcast in the midst of my own people"

Amar’s early life was marred by rejection, but thanks to Anandaban hospital and the faithful witness of TLM staff, his life has been completely transformed

“I am a person affected by leprosy. I was born in a remote village of Nepal into a poor family. When I was 10, I developed an unknown disease. My health worsened day by day. I was taken to witch doctors, but nothing helped.

Eventually, I was taken to see a senior doctor at a hospital in Kathmandu who advised me to visit TLM’s Anandaban Leprosy Hospital.

There, I was diagnosed with leprosy. Life has never been the same since. I was still too young to understand the consequence of this diagnosis. But the expression on my parents’ faces was clear enough to suggest that things were very, very serious.

My parents left me at Anandaban for further treatment and went home. I stayed there for about three months.

No-one came near me

When I returned to my village, I found that the sea of relatives I had grown up with had turned into a desert of strangers. No-one was willing to come near me. I was an outcast in the midst of my own people.

I wept bitterly. For a child, the pain of being deprived of a mother’s touch and father’s stroke is next to death. Every now and then, I visited Anandaban Hospital to keep track of my recovery. At every visit, I was admitted for investigation.

During those intermittent stays at the hospital, I received great motivation, love and encouragement from the staff. Back at home, everyone knew I had leprosy.

I was isolated even by my closest relatives and friends. Social gatherings, feasts and parties were out-of-bounds for me. All I did was languish at home and weep out the whole of my heart.

Worst of all, I lost my school! The teachers and my peers were scared of me; no-one wanted to exchange a word with me, and I became a subject of derision.

Then, one day, one of the doctors at Anandaban Hospital recommended that I attend St Xavier’s Social Service Centre – an orphanage – for my education. I was obliged to accept the offer and I stayed there as an ‘orphan’ though my parents were still alive.

After I completed my higher studies, I started working as a primary school teacher in Kathmandu.

The worst moment in my life

One day, my father informed me that it was time for me to get married. He had found a suitable girl for me from a distant village. We got married and everything was going well until my wife came to know that I had once had leprosy. Straight away her behaviour changed. Eventually I was compelled to sign the divorce papers. That was probably the worst moment in my life.

Sometime later I found my soul mate, with whom I shared all my stories. She accepted me, and we got married and now have two children.

We stayed in Kathmandu and I continued working as a teacher. I also became involved with leprosy organisations such as IDEA Nepal.

Learning about the love of Jesus 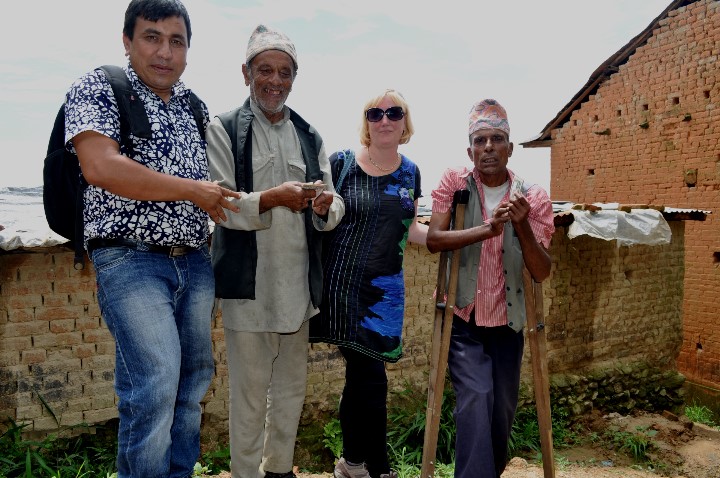 In 2015, as the chairman of IDEA, a TLM partner organisation, I was invited to join The Leprosy Mission Nepal’s Annual Country Learning meetings. I enjoyed the morning devotional sessions led by Sheldon Rankin, National Director for TLM Australia. There, I learned about the love of Jesus to people affected by leprosy. Mr Sheldon shared the message in such a way that touched my heart. At that time, I wanted to raise up my hand and say, “Yes I want to believe in Jesus,” but I thought that it was not a suitable time.

Immediately after the session I shared my feelings with Pastor Ashok Adhikari and Mr Shovakhar Kandel, TLM Nepal Country Leader. Mr Adhikari invited me to his church to lead me further in my faith journey. With his help, I accepted Christ as Lord and Saviour.

Since then, life has been quite different. I have been living more for others than for myself. I have travelled to almost all the nooks and crannies of my country and, also, to many countries of the world. The people I have met during these travels, especially those affected by leprosy, have made me realise that compassion is the biggest binding cord in the world. Medicine might cure the blot on the skin; only love and compassion can heal our hearts.

It is my heart’s desire to reach every person affected by leprosy and to share the love of Jesus with them. I shall continue to do so everywhere I go. For I imagine a world free of leprosy, free of stigma, free of derision and free of hatred.

Before I believed in Jesus, I was worried about my life. My mind was full of anxieties. But now I do not worry about my future; neither do I worry about my present. I have surrendered myself to the Lord and he has a proper plan for me; plans to prosper me but not to harm me (Jeremiah 29:11). God not only has plans for me but for every individual who believes in him.

Today, people from my home village, my friends and family, regard me as a dignified person and I am respected and welcomed to everyone’s home. I know what it feels like to have leprosy, and the stigma associated with it. I shall, throughout my life, work to restore leprosy-affected people back to normal life, the life of dignity.

Had I not suffered from leprosy, I wouldn’t have come to know the love of Christ. Thus, I pray that all the friends affected by leprosy around the globe, like me, may feel the love of Jesus and enjoy new and regenerated life. I am happy today and want to see happiness in the faces of my brothers and sisters around the globe.”

Amar is the principal of a school in Kathmandu, the president of IDEA Nepal, and serves as a board member of TLM International and is on the advisory panel of people affected by leprosy for ILEP.