Diyan is seven years old and is temporarily living in a children’s home in Kolkata, India, for children from leprosy-affected families. His mother has died, and his father is working, but has been receiving treatment for leprosy so has not been able to care for Diyan. 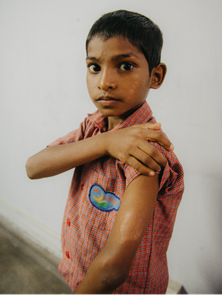 He was diagnosed with leprosy when he was 6 years old. But no-one knew he had it, the only saw patches on his arms and face. He burned his hand quite badly, but didn’t feel any pain due to the leprosy bacteria attacking the nerves in his hand.

His patches are still visible, and in fact had been getting bigger. The levels of leprosy bacteria are so high that he has now been put on a stronger treatment of MDT (MB).

He is a gentle and calm young boy, who seems a little bit lost at times but he is starting to make friends.

A house parent called Swapon Naiva looks after Diyan and the other boys. Swapon grew up in the same home in the 1970s. He has now come back to work there, to look after the children and to give them a better life.

He is gentle and kind and explains everything to the children very clearly. He encourages them and they clearly like him.