One of the projects that TLM NI has supported in India over many years is ‘Catch Them Young’, a project that gives children and young people affected by leprosy the skills, education and experience necessary to overcome barriers in their lives and to fulfil their potential. Chandu’s story is a great example of how this project is changing lives

While staying at TLM’s Naini hospital in Uttar Pradesh, India, Chandu loved to watch the nurses go about their work. Chandu had leprosy and was receiving treatment at the hospital for an ulcer on her foot. As she recovered, Chandu dreamed of one day becoming a nurse herself. 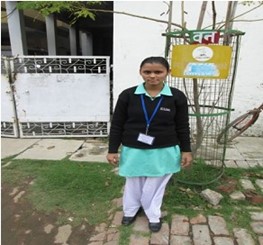 But Chandu’s family were incredibly poor. Her father had died when she was just five years old, leaving her mother to provide for six daughters. Somehow, she had managed to meet the basic needs of the family by working as a farm labourer.

Worrying about the future

But in 2006, Chandu was diagnosed with leprosy. Her mother worried terribly about her future. Who would want to marry her now? Who would take care of Chandu in her old age?

After her foot had healed and she was discharged from hospital, Chandu went back to school and completed her final exams. But she had no idea what she would do next. Her mother could not afford to pay for her to go to college.

Then, a meeting with one of TLM’s Catch Them Young project workers changed her life forever. Catch Them Young is a school scholarship and education scheme aimed at children or young people who’ve been diagnosed with leprosy, or who come from a leprosy background.

The project worker explained to Chandu that she could receive the financial help she needed to enable her to attend nursing college. Chandu really felt her dreams were coming true. But life from then on did not go as smoothly as she’d hoped.

Her fellow students did not want to share a room with her when they found out she had leprosy. They avoided her and looked down on her. Chandu was shattered. Desperately unhappy, she decided to leave nursing school and give up on her dream of becoming a nurse. Thankfully, Catch Them Young project staff stepped in. They visited the college and spoke to students and staff about how leprosy is not something to be fearful of.

Gradually, the students began to accept Chandu, her confidence began to grow and she excelled in her studies.

After completion of her course, Chandu joined TLM Naini as a trainee and has started her journey of serving people affected by leprosy and disabilities.

More about Catch Them Young

In 2017, 1119 children were supported through financial assistance in 16 centres in eight States. Alongside school scholarships, the children enjoyed visits to museums, taking part in a children’s parliament, and study groups to help them prepare for exams. Some children were also selected to be leprosy champions; they have been trained in leprosy detection and in advocating on behalf of leprosy-affected communities and individuals.