Arup, 13, has been able to go home from Purulia having travelled 80 miles to the hospital when his mum suspected he could have leprosy. 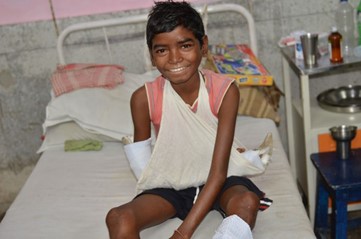 She is leprosy-affected and thankfully realised something could be wrong when Arup found an ulcer on one of his toes. After being given the cure for leprosy, Arup developed a painful reaction, his body’s response as it fights to get rid of the dead leprosy bacteria in it. There is a great risk of becoming permanently disabled at this time and Arup was admitted to Purulia hospital to receive further treatment.

Arup was very brave during his four-month stay, especially as his mum could only visit him once a month because of the distance to the hospital. Arup has three siblings and if she did not continue her work as a labourer, she could not afford to feed the family. Thank you for helping children like young Arup.

Find out more about Purulia Hospital and our campaign to transform the outpatients' department.