Hope and healing for a Nigerian teenager

Aboubacar is 14 years old. He lives in Nigeria and has been in and out of hospital 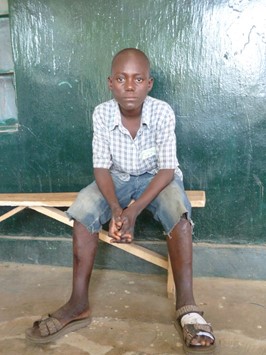 for much of his young life.

When he was four years old Aboubacar developed some strange patches on his skin. He also started experiencing pins and needles in his arms. His family had no idea what was wrong with him. They took him to many doctors and even to a large hospital but the treatment the doctors gave him did nothing to relieve the symptoms.

When Aboubacar was eight or nine his mother took him to a hospital about an hour away from his home. The hospital, supported by The Leprosy Mission, specialises in treating people with leprosy.

He was diagnosed with leprosy and, finally, given the treatment he needed.

Leprosy is only mildly contagious yet many people and communities around the world are fearful of it. Leprosy attacks nerves in the skin resulting in numbness and loss of feeling, particularly in the hands, feet and face. This means that people affected by leprosy often cannot feel pain.

Because Aboubacar did not receive the treatment he needed when he was very young, he has lost feeling in his hands and feet. This means that if he steps on a nail in bare feet, or touches something that he doesn't realise is hot, he may cause damage to fingers and toes and other parts of his body.  Recently a cut in Aboubacar's foot became infected – he found it very strange as, although the wound was very bad, he did not know how he had done it and did not feel any pain. Aboubacar returned to the hospital and he is now receiving treatment as an inpatient – the wound may take several weeks to heal.

Aboubacar's hands have also been damaged by leprosy, and have begun to curl into fists. He would benefit from surgery to improve the movement in his hand.  But surgery is expensive. That is why it is so important that an organisation like The Leprosy Mission (TLM) exists. TLM trains doctors, runs specialist clinics, raises funds and runs projects to enable people like Aboubacar to experience life in all its fullness; if he has corrective surgery on his hand he will be able to finish his education, and he really loves going to school! The Leprosy Mission needs on-going support to provide services like the hand surgery that Aboubacar needs.

Aboubacar's story is featured in our 'Shoes, feet and all things sweet' resources.

Find out more about our work in Nigeria.