The haunted look on 12-year-old Kamal’s face says it all – the trauma of losing his mum, his dad’s inconsolable grief and his home a heap of rubble.

In 2015 Nain and his two sons were left deeply distressed by the impact of the Nepal earthquake; not only did they lose their home, they also lost a loving wife and mother. 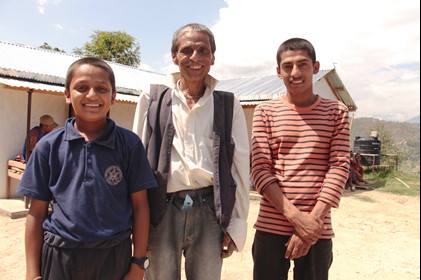 Nain, who has leprosy-related disabilities, was dependent on his wife for so many things, not least providing for the family as he is unable to work. Immediately after the earthquake struck, Nain and his sons lived in a temporary shelter made of tarpaulin sheets. But generous gifts from TLM supporters enabled them to buy metal sheets to give them better protection when the rains came.

Nain said their tin shack was ‘like a palace’ compared to the tarpaulin cover. The boys’ mum Pushpa, 42, died instantly when their roof collapsed. Krishna watched helplessly as the walls caved in on his wife of 22 years.

It is now two years since Nepal was struck by the 7.8 magnitude earthquake which killed some 9,000 people, injured countless others and destroyed over a million homes. The hillside villages were among the hardest hit with 90 per cent of homes destroyed. All eight houses in Krishna’s village were destroyed. Five people died including Krishna’s wife. But Nain’s story doesn’t end there. Your compassion and generosity has made it possible for them to have a proper home again. Without his wife, Nain was concerned for his families’ future: “It’s impossible for me in this life to build another house for my family,” Nain said.
But your generous gifts in response to our World Leprosy Day campaign (in 2016) along with other donations received from around the world have helped to build a wonderful new home for Nain and his sons and families like him.

“My life is changed now,” says Nain with a big smile on his face. “I can live a dignified life. Me and my children feel secure now.” He thanked donors for showering his family with “kindness and love”.
Through your gifts many other families will have homes rebuilt and be given a fresh start. Thank you!

Find out more about our work in Nepal.