Purulia Hospital in India is a very special place as it is The Leprosy Mission’s oldest hospital. It first cared for a dozen leprosy patients in two mud huts more than 130 years ago.

As we told you in June 2019 your gifts from our World Leprosy Sunday campaign in 2017 enabled work to begin on the building of a new Outpatients’ department at Purulia – and that department opened in December 2019!

Staff are now better equipped to love and treat the 50,000 patients coming through the hospital doors each year. We cannot thank you enough for your generosity to the Transform Purulia campaign which began in 2017.

Purulia Hospital is like an oasis in the desert for thousands of people living across a vast area of India. These are people who usually cannot afford healthcare. Purulia Hospital’s reputation precedes it and people with leprosy will travel for days to reach the hospital. This is after hearing of the care and kindness shown by its skilled staff.

Up until now 400 people a day crammed into the tiny waiting room where they often stayed for many hours to see a doctor. No one was turned away, but it was an uncomfortable wait in sometimes unbearable heat. As you can imagine, it was especially difficult for people with disabilities. 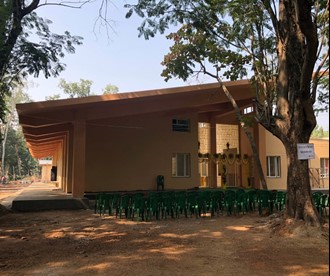 For many years, Dr Famkima Darlong and his wife Dr Joydeepa Darlong ran Purulia Hospital. Dr Fam once joked that there was no privacy for patients in the old Outpatients’ Department. “If a patient had an itch, they couldn’t tell the doctor where it was without 50 people listening,” he said. He continued in a more serious tone: “Why should a leprosy hospital be small and dark? Why shouldn’t people with leprosy have a good building?”

It was wonderful to see the joy of the two doctors at the opening of the brand-new Outpatients’ Department in December. The new department with its spacious waiting area and six new consultation rooms will allow patients to be examined with dignity. There are also two minor procedure rooms a pharmacy, toilet block and two lab areas.

As Dr Fam told the crowds at the opening ceremony: “People in the UK have transformed Purulia Hospital. God heard the prayers of our hearts and He has blessed this hospital. God’s plans are to prosper.”

Dr Joydeepa added: “Our hearts are overwhelmed when we think of God’s goodness. We asked for a little and He filled our cup up until it spilled over the brim.”