As a voice for the marginalised and as Patron of TLM England and Wales, Princess Diana changed the way the world viewed leprosy

On 31 August the world remembered Princess Diana’s tragic death in a Paris underpass 20 years ago. As the spotlight has once again shone on her life, people have been reminded of her love and compassion for the marginalised. This famously included people affected by leprosy.

Princess Diana was the Patron of TLM England and Wales from 1990 until her death in 1997. When she reduced her patronage of almost 100 charities down to just six in 1996 she chose to continue in her role as Patron of The Leprosy Mission, demonstrating a real heart for the cause.

Leprosy was a disease that had a huge impact on Princess Diana and she visited a number of Leprosy Mission hospitals, famously making the headlines by touching people affected by the disease, going against the advice of her Royal officials. After visiting the Sitanala Leprosy Hospital in Indonesia in November 1989 the headline in The Sun the next morning was ‘Di to Shake Hands with Leper, Don’t Do It, Di’. 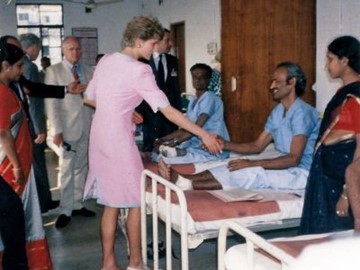 She spoke passionately at a global anti-leprosy conference in London in 1996 where she explained her actions. “It’s always been my concern to touch people with leprosy, trying to show in a simple
action that they are not reviled nor are we repulsed,” she said.

Laxmi was an 18-year-old patient at The Leprosy Mission’s Anandaban Hospital in 1993 when Diana came to visit.

The Princess of Wales spotted the shy teenager and stopped to talk to her. She noticed her deformed hand and took it in her own. A few days later Laxmi had an operation to correct her deformed hand which had ‘clawed’ due to leprosy-caused nerve damage.

“It was the most wonderful moment of my life,” Laxmi said.

“But it is not something I could ever tell my friends or family.”

Laxmi felt she couldn’t tell anyone close to her about her encounter with Diana Princess of Wales because of the stigma surrounding leprosy. 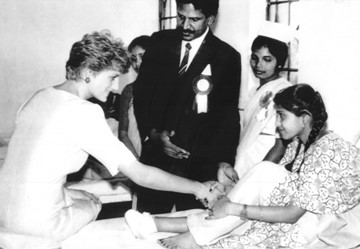 Shovakhar Kandel, Country Leader for The Leprosy Mission Nepal, was a junior officer at Anandaban Hospital at the time of Diana’s visit.

He said: “She didn’t wear gloves and touched patients with her bare hands. She didn’t seem to have the fear that many others have.”

She said: “Most people come to see the work of the hospital, it’s about the bigger picture. But Diana came to see the patients. It was about the people’s stories for her.

“When she came into the hospital we expected her to stand by the bed and talk, but she sat on their beds and held their hands. The patients were touched and overwhelmed by her kindness.”

Watch the 20th anniversary video of Princess Diana's impact on the lives of people affected by leprosy: